Did your caterpillars crawl up in your rearing container, hang, and die? The stench is horrific and the caterpillars turn to dark black liquid? Chances are they have NPV, Nuclear Polyhedrosis Virus.

Melt, Wilt, and Black Death are a few of the other names that are used for this virus. 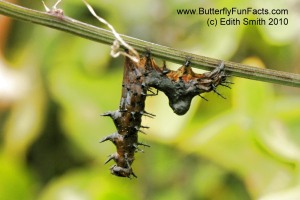 The biggest concern we hear from people is that they somehow caused their caterpillars to die. First, unless you’ve had NPV in your rearing center before and you didn’t disinfect things, you aren’t responsible at all. Second, if you didn’t disinfect and are just now learning that you should have, welcome to the club of ‘learning the hard way’. You still are raising more butterflies from caterpillar to adult butterfly than nature does. Be encouraged and determined to save even more. Nature isn’t too kind to caterpillars.

NPV is all over in nature. In areas where winter is hard and long, NPV is seen less often. Some areas have NPV issues every fall. Gardeners and butterfly enthusiasts who live where winters are short or non-existent are often dismayed and heart-broken to see dead black caterpillars hanging all over their passion vine. Gulf Fritillary caterpillars are found dying from NPV in these areas in the late fall. Quite often dozens can be found dying on the same passion vine.

Don’t just jump to the conclusion that a dissolved caterpillar has NPV. It may have died from another cause. Some predators leave a caterpillar looking as if it has NPV. The liquefied frass dump of Swallowtail caterpillars (just before pupating) has the look of a caterpillar dead from NPV.

Signs and Symptoms of NPV:

How does NPV spread?

NPV causes the caterpillar to crawl upward before it dies. After crawling upward, the caterpillar will normally hang in an inverted V from its middle legs or in a straight line from its anal prolegs. It dies and turns to pure liquid. The liquid drips out of the cuticle of the caterpillar, splattering over leaves below it. Rain or irrigation splashes the dissolved caterpillar (full of NPV particles) over other leaves and surrounding items. Insects that are attracted to dead animals visit the foul-smelling liquid and fly off, tracking it everywhere they land. The trellis or other item upon which the vine was climbing becomes contaminated with the virus particles. Butterflies lay eggs on the leaves, picking up virus particles on their legs and abdomen, and spread them to other passion vine and nectar plants as they fly about laying more eggs and drinking nectar. As butterflies lay more eggs on the vine, the hatchling caterpillars eat the leaves and immediately are infected with the virus.

How can you avoid NPV?

If you’re bringing in caterpillars from outdoors and raising them indoors, it is very difficult to avoid NPV forever. If you live where winters are mild, there is a greater chance of having NPV in your caterpillars. The longer growing season gives more time for it to spread in the year.

If you suspect that NPV may be an issue, never add new caterpillars to a rearing container that already has caterpillars. Start a new one! Always wash your hands well before AND BETWEEN opening containers and feeding caterpillars.

Any caterpillar with unusual movements or appearance should be isolated and reared in a separate container than your other caterpillars.

If the host plant is growing where wild butterflies can touch it, wash the leaves with bleach water and rinse them well before feeding them to your caterpillars. Be sure to pat the leaves dry first! Wet leaves are not healthy for caterpillars. Leaves can be disinfected by soaking them for three minutes in a solution of 95% water and 5% bleach. Remember – rinse well and pat dry! If you reuse your rearing containers, disinfect your rearing containers between every batch of caterpillars.

If you’re raising caterpillars in your home and some of them died from NPV, you need to do a thorough disinfection. First, clean the rearing containers of any solids: old leaves, dead caterpillars, etc. You should euthanize your living caterpillars. Freezing them in a plastic bag is a great way to euthanize them. It’s kinder to kill caterpillars quickly than to allow them to slowly die from NPV. Your rearing containers should be either washed twice in the dishwasher or soaked in a solution of 5% bleach and 95% water (in the tub or sink is great) for a very minimum of 15 minutes. They should be rinsed well and set outside (away from plants with caterpillars) for a few hours. Remember that bleach will dissolve the cement that holds stones in rings. It also takes color out of clothes and carpets. Use caution. Use of gloves is highly recommended. It is best to ventilate the room in which you’re bleach-disinfecting your containers if possible.

Think of everything you touch after you feed caterpillars. If you can, use a bleach wipe or other disinfecting wipe to clean those items if they are colorfast. Door knobs, light switches, broom and mop handles, vacuum handles, car keys, car door handles, purse handles, refrigerator/freezer handles, TV remotes, cell phones, computer keyboards, computer mouse, faucet handles, sink sprayer hose, toilet flush handles … disinfect as many items that you touch as you can. It may be overkill in some situations but it is better than spreading this disease to more caterpillars.

Although 6 hours of direct sun normally kills the virus, there are places where direct sun will not reach. The NPV loaded liquid splashes under the leaves, under fence panels, along the side of the house behind the vine, and other places near the vine that direct sunlight cannot reach. 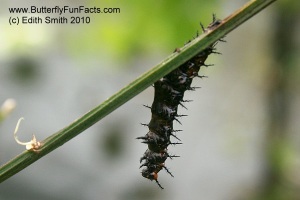 Some strains that are selective and infect only a particular species of moth or butterfly are commercially available for gardeners, farmers, nurseries, and foresters.  The USDA sprays forests with the strain of NPV that kills Gyspy Moths, a true pest in many forests as well as in trees in our yards.

Don’t become discouraged if NPV visits your yard. It can emotionally knock you down to the ground. Remember that it’s normal in nature.  You didn’t do it. Nature did! Just pick yourself up, clean things up, and keep on growing!

You have successfully subscribed!

Please login and you will add product to your wishlist

Deal of the day